Many Asian men like to claim heritage from Genghis Khan. This is a point of pride for these men, and it can get them some serious respect. After all, Genghis Khan conquered and ruled the largest empire the world has ever seen. The only other empires that can even compare were the Roman Empire and the Macedonian Empire. However, neither of these other empires was built in a single life time.


Want to learn about Genghis Khan's personal life? Check out this series from Extra History.

Like any ancient conquest, some of the rewards were the conquered people. The result was a change in the genetic composition of most of Asia.

With most ancient conquests, the people who tend to suffer the most are the women who are captured or killed. Ancient societies generally regarded women as property to be taken or destroyed after conquest. This is why the Vikings are synonymous with “raping and pillaging.”

However, the horde of Genghis Khan treated the spoils of war differently. Before he was born, Genghis Khan's mother was abducted by a rival tribe, and was forced to marry a man named Yesugei (Yee-Sue-Gay). This led to his birth. Before he became Genghis Khan, Temujin also saw his wife (Borte) captured and raped. She became pregnant as a result. Temujin adopted the child of this rape as his own. 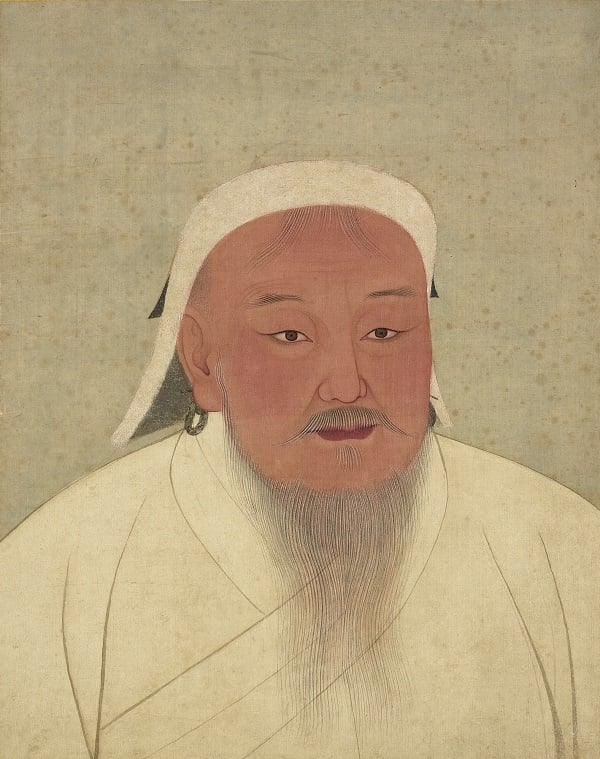 A painting of Genghis Khan, ordered by his grandson, Kublai Khan.

When Temujin ascended to the role of Khan, he established a new set of rules governing warfare and conquest. This set of rules is known as the Yassa. Under the Yassa, abduction and abuse of women was punishable by death. Men who wanted to take wives would have to pay the family of the woman a bride price. While these rules could not prevent all abuses, nor could it stop non-consensual marriage, the threat of death made the soldiers much more aware of their behavior. Soldiers could still take multiple wives -- but they would have to pay for them.

Sidenote: While Genghis Khan’s military actions led to the deaths of millions, his actions show that he did genuinely care about the people under his rule. This does not excuse the killing, but illustrates a more complete picture of Genghis Khan.

The Mongol Empire started small. Before Genghis Khan, Mongolian tribes engaged in regular, petty conflicts with each other. Genghis Khan united them all under his banner.

However, uniting these tribes took him 45 years of his life. His empire only started expanding once he was well into his middle age and would continue after he died at the age of 65 in 1227 CE. In 20 years of rule, he managed to take a large swathe of Asia.

He started by raiding kingdoms in northern and western China. He eventually pushed West, conquering all the way to the Caspian Sea. His sons and grandsons would eventually make their way to Turkey, Southern China, and the Baltic Sea.

Genghis Khan died in 1227 CE. His sons were able to spread the Empire further. Image Courtesy of Wikipedia

The Genetic Footprint of Genghis Khan

Needless to say, this conquest had a profound impact on the genetics of regions that were conquered. Many people died, and those that survived a different genetic composition. A 2003 study found that, across all of Asia, 8% of men had the same Y-chromosomal haplogroup. 8% of Asian men amounts to 0.5% of the world’s population.

This Y-chromosomal haplogroup carries unique signatures that originated in Mongolia about 1000 years ago (1000 CE-ish). The rapid spread of this haplogroup can only be attributed to one thing -- conquest by Genghis Khan. In fact, the geographic locations of this haplogroup match very closely to areas conquered by the Mongolian Horde. 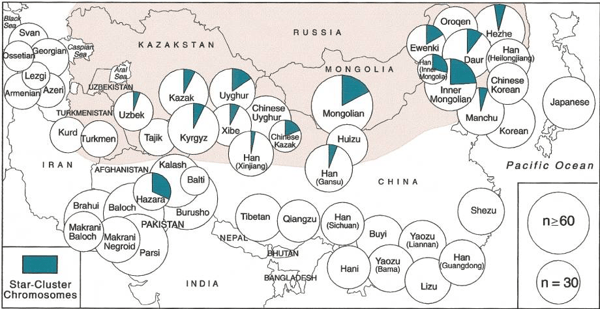 While it would be fair to say that Genghis Khan has influenced the genetics of 8% of all Asian men, it would not be accurate to claim that this 8% is all descended from Genghis Khan.

Y-Haplogroups are passed from father to son. Young Genghis Khan was the son of Yesugei (Yee-Sue-Gay), a tribal chief. Yesugei also had other sons and relatives. The Y-chromosome that Genghis Khan inherited was not unique to Genghis Khan -- many of his tribesmen and family would have also shared the same Y-chromosome.

Around 0.5% of the world’s population today has this Y-chromosome. As you might imagine, a lot of sex would need to happen for Genghis to have that large an effect on the world’s population. But Genghis couldn’t be the one having all the kids. He was too busy conquering to focus on that much baby-making. Many of his relatives, his male descendents, and others from his tribe could have contributed to the spread of this chromosome.

There are also three other important things to bring up from this research:

Without a doubt, Genghis Khan changed the world. Not only did he shape the world geopolitically, he changed it genetically. However, he was not the first person to do so, and it is unlikely that he will be the last.

The story told by genetics is often a confusing and winding path. While history will record the world’s “greats,” genetics shows that even somebody who is relatively unknown can have a major impact. Such is the case for Y-chromosomal Adam, and Mitochondrial Eve.

If you’re interested in learning about other historical figures or groups who may have shaped this world’s genetics, let us know. We have a few people and groups in mind, such as Charlemagne, the Vikings, and the Conquistadors. We look forward to reading your comments!