Curious Research Information: What Does It Mean To Be German?

When people today hear about the German people, they think about Germans from recent history. They may think of the East/West German split, World War 1 or 2, or Otto von Bismarck. But German history extends much further back than the last century and a half.

The first written records of a “German People” appeared with the Romans. These records date back to 100 BCE and later.

But we must go deeper.

Before humans (Homo sapiens) were in Germany, there were actually two other hominid species: Homo heidelbergensis, and Homo neanderthalensis. You may recognize the species name of Neanderthals. In fact, the first Neanderthal remains were uncovered in what is now Germany, in 1856.

A side-by-side comparison of Neanderthal and Human skeletons. Image Courtesy of Discover Magazine.

Geneticists estimate that Neanderthal genes constitute about 2% of modern European and Asian DNA. Scientists believe that humans interbred with Neanderthals on many different occasions, and we know that they had territory in what is now Germany. Some of the first Neanderthal and Heidelberg skeletons were discovered in Germany.

Human history in Germany starts around 4600 BCE, in the late Neolithic. This is after the last Ice Age. While we have no written records from this time period, anthropologists dug up tools, structures, and garbage to figure out what life was like for early Germans. Two cultures overlapped in this early time period: The Rössen culture and the Funnelbeaker culture. Little is known about these cultures other than the pottery and tools they left behind. They used stone axes and knives, lived in houses made of clay and thatched roofs, and managed farms and farm animals.

This eventually gave way to what is now known as the Nordic Bronze Age. Anthropologists have found bronze items throughout Scandinavia that date back to this time. The strange thing about the bronze in these northern regions is that copper and tin are not common. Evidence suggests mining activity near the Danube region in Germany produced these materials. Customary burials for nobles included stone ships and burial mounds.

Around 750 BC, the Germanic tribes began to spread south, west, and east from the areas near Denmark. This continued until about 60 BCE, when German tribes bumped into territory held by the Celts, Slavs, and, most importantly, Rome.

The Romans first encountered Germanic tribes during the Gallic Wars, and we get our first written records about the Germans from the Romans. Julius Caesar was in the process of conquering the Gauls in what is now France. During this campaign, he built a bridge across the Rhine river, but did not advance very far beyond it because he didn’t encounter any enemies.

However, the Suebi, a group of Germanic tribes, would later attempt to capture the area to the west of the Rhine. Each time the Suebi attacked, Caesar’s forces rebuffed them. The repeated attacks got the attention of Caesar’s successor, Augustus.

In 7 CE, Emperor Augustus appointed Publius Quinctilius Varus as the first governor of Germania, the name the Romans gave to the region. Varus was known as a cruel ruler, who enacted high taxes and swiftly crucified rebels.

In September, 9 CE, Varus received word from Arminius, a German prince and Roman citizen, that a revolt was growing to the West of the Rhine. Against the advice of another German noble, Varus followed Arminius to the supposed revolt, with 3 Roman legions in tow. Each Roman legion comprised around 1,000 to 1,500 men. The Cherusci, a German tribe led by Arminius, ambushed the legions. The heavy forests and swamps in the region rendered Roman tactics useless, and all three legions were lost over the course of three days. When Varus realized that all hope was lost, he committed suicide. This ambush would kick off a series of three wars with the Romans.

Upon hearing the news, Emperor Augustus was stricken with grief. He tore his clothes and according to his biographer, he shouted,

“ Quintili Vare, legiones redde! (Quintilius Varus, give me back my legions!)”

In 13 CE, Augustus appointed Germanicus (the name was granted posthumously) as commander of the Rhine, entitling him to nearly ⅓ of Rome’s forces. Germanicus waged three campaigns against the Germans over the span of 4 years, and had many successes. However, the new emperor, Tiberius, decided that the war with the Germans was too costly, and recalled Germanicus to Rome. 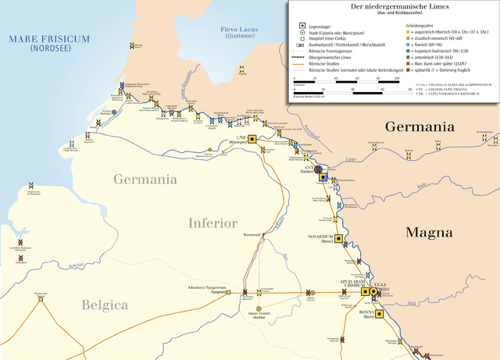 The final territory captured by Germanicus along the Rhine and Danube Rivers.

After these campaigns, Rome never set its sights on Germany again. It officially established the borders of Germania (Germania Magnus) along the Rhine and Danube rivers. This official stance continued until the fall of the Western Roman Empire in the 5th century CE.

Remember how the Romans trounced the Gauls in France?

Well, the Germans decided to get in on the action too. When the Western Roman Empire fell, the Franks (a western German tribe) took advantage of the situation.

In the space of about 80 years from the fall of Rome in 480 CE, the Franks conquered most of Western Europe. They followed it up by conquering Italy in the 700s, forming all of Francia. In the process of all this conquering, they destroyed the Burgundians, the Gauls, and the Ostrogoths. They even got some land in the Iberian peninsula.

So, to set this straight:

In short, the French are actually Germans.

At the height of Francia’s power in 800 CE, Charlemagne, King of the Franks, was crowned Emperor of Rome by Pope Leo III. This started the Frankish Kingdom on the path towards becoming the Holy Roman Empire. First stop: The Carolingian Empire.

The Frankish Kingdom became the Carolingian Empire in 800 CE. For the most part, this was a simple renaming. However, after a civil war in 843 CE, the Carolingian Empire was split between 3 different kingdoms (West, Middle, and East), one of which was crowned “king” over the others, but had no real authority over them.

As you can imagine, this didn’t sit well with any of the kings. Western Francia split off from this confederation, and became what we now know as France. Middle Francia was annexed by Eastern Francia, and the Holy Roman Empire was founded in 888 CE.

Because the Holy Roman Empire (which I will abbreviate as HRE) was a loose collection of principalities and territories, its map was a nightmare. It was loosely divided into four different kingdoms:

Here’s the territory that the HRE held (all images courtesy of Wikipedia):

Here’s what the HRE looked like when divided between the four kingdoms: 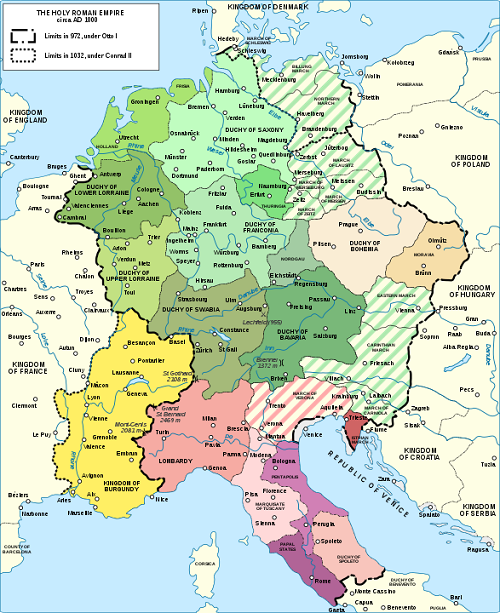 And here’s what their actual map looked like when divided by principality:

That map is the stuff of nightmares for any ruler.

While the HRE existed in some form or another for nearly a thousand years, small portions of it kept breaking off from the greater whole. When you look at the map above, you can guess why. The HRE constituted a huge portion of Europe, and each different location had its own individual needs and politics. Managing all of this would have been a nightmare for any ruler.

Towards the end of the HRE’s life, two major powers began to emerge above it all: Austria and Prussia. Austria originated in the Kingdom of Bohemia to the southeast, while Prussia formed in the northeast.

The HRE, weakened by several major schisms, was not doing too well in the early 1800s.

Then the French had a little revolution, which was partially inspired by the American Revolution. Things got extremely chaotic in France after the revolution, and a new leader rose above the rest: Napoleon Bonaparte. Napoleon navigated the dangers of post-revolution France, and ascended to kingship.

Then, in what can only be described as a rampage, Napoleon ripped Europe a new one. He completely destroyed the HRE and conquered most of Europe in under a decade.

However, in the process of conquering Europe, Napoleon made two fatal mistakes:

Napoleon was defeated at the famous Battle of Waterloo in 1815, ending the French hold over the continent.

For the sake of simplicity (and my fingers writing this), I’m not going to cover both of the World Wars. Instead, I’m going to cover their impact on the demographics in Germany, and their ultimate effect on genetics.

The first World War was kicked off by the assassination of the Archduke Franz Ferdinand. The exact reason why his death was important is convoluted, but it launched the events of the next 30 years.

World War I had a massive impact on European and German populations. Many civilians and soldiers died, and Germany was left destitute after the war. Germany lost an estimated 2 million soldiers, and around a half-million civilians.

The Weimar Republic popped up in the interim between World Wars. In its attempt to repay its war debts during the Great Depression, it drove Germany’s economy into the ground. It printed money, completely devaluing German currency. This sparked the rise of the Nazis, who blamed Jews and other minorities for the problems.

Skipping ahead to the next World War, Nazi Germany committed atrocities against its own citizens. We collectively refer to these atrocities as the Holocaust. Whereas most wars before WWII led to (mostly) indiscriminate deaths, the Holocaust targeted specific groups:

Many of these figures are estimates because documentation was either scarce or destroyed.

As a result of the actions of Nazi Germany, the genetic makeup of modern Germany has changed. Many survivors of the Holocaust left the region and fled to the western hemisphere and the UK. Today, Germany is 90% European (with 75% native German).

But, unlike the rest of Europe, Germany’s government actively supports immigration from other regions. It is second in international immigration in the world. First place goes to the United States. The German government is working to improve the lives of minorities and make reparations for Holocaust damages. They actively work to reduce antisemitism and anti-minority sentiment.

So that’s our brief™ explanation of German genetics. Did you learn something that you didn’t expect? Let us know in the comments!