How Related Are You To Your Family? A Practical Examination of Statistics in Genetics

Have you ever wondered how you could possibly be related to your brother or sister? Well, good news. There’s a mathematical way to determine that! The same is also true for all of your relatives.

I know how most people don’t like math, but trust me, this is fun math!

Let’s start with the easy stuff. Your nuclear family -- parents and siblings.

But now we encounter our first challenge: Your siblings. Common sense would suggest you share at least 50% of your DNA with them. After all, you came from the same parents. On average, this is true. But it isn’t always true. 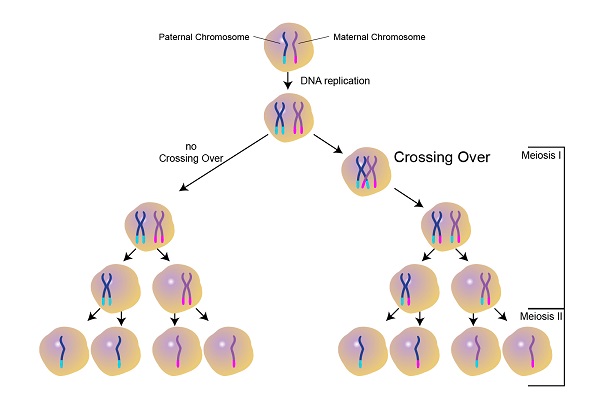 A diagram of how meiosis and crossing over works. Image Courtesy of the NIH.

You can see how quickly the probability approaches 0. Image Courtesy of The Tech

So, if you and your sibling take DNA tests and get different results -- now you know why! You’re not guaranteed to have the same chromosomes, and these chromosomes could have different origins.

This is all well and good, but you want to know how closely related you are to your cousin, your second cousin, and so on. The good news is that the math is pretty simple. The bad news is that you’re going to have to keep track of a lot of small details.

For example, let’s say you have a half-brother. You have the same mom, but different dads. Well, you both got half of your DNA from your mom, but share 0% of the same DNA from your dad. So you share half as much DNA as you would with a full sibling -- 25% instead of 50%.

Now let’s hop over to your cousins. Now we have to keep track of your family tree. First, you share half of your DNA with your parent, so we start at 50%. Then, your parent shares around half their DNA with their sibling (your uncle or aunt), so we multiply by 50% to get 25%. Then, your cousin has half of their DNA, so we multiply again by 50% to arrive at 12.5% shared DNA. So each cousin has approximately ⅛ of the DNA that you have.

But wait! What if your uncle or aunt was only a half-sibling? Well, then you multiply by 50% again, to arrive at 6.25% of the same DNA as your cousin.

Great! But what about second cousins? Third cousins? Etcetera etcetera.

To spell this out:


As you can see from the table above, things get really complicated really quickly. This is why autosomal DNA is not as useful as Y-DNA or mtDNA for reaching back past further than 5 generations. At 5 generations away (great-great-great grandparents), you only share 3% of your DNA. Each generation shares 50% less DNA with you.

If you’re not interested in doing the math yourself, the International Society of Genetic Genealogy provides a massive table that breaks some of these numbers down.

This might seem like a tangent, but these numbers can help to explain a phenomenon in evolutionary biology: Altruism. Altruism is a tricky question in evolution. After all, if only the fittest survive, why bother helping those who aren’t as fit?

This is the question that Darwin and many biologists had to answer. It’s clear that altruism is common in social species. As an extreme example, worker ants can’t reproduce. They cannot add to the gene pool. And yet, they work together and help each other out. Why would such a system of altruism evolve?

The answer lies in kin selection. Worker ants are 50% related to the queen ant, their mother. If they can help their mother have more children (specifically, more queens), then they still get to contribute to the gene pool. Any future queen ants produced by their mother will share 50% of their genes too. It’s in their best interests to help their mother produce as many queen ants as she can.

You can see similar behavior in other social animals. For example, crows can raise their young as a tribe. Adult children will help their parents raise more siblings. The whole tribe pitches in to help raise the young. Not only do the kids have their own children -- they also help other family members raise their kids!

And humans do it too. Even if you don’t have your own kids, you may pitch in to help your siblings or cousins raise their kids. This can help spread your genes indirectly. After all, a niece or a nephew shares 25% of your DNA. As the famous evolutionary biologist J. B. S. Haldane put it:

... in the world of our model organisms ... everyone would sacrifice it [their life] when he can thereby save more than two brothers, or four half brothers or eight first cousins ...”