Maternal Ancestry: Not Just For The Ladies

When we think about DNA, we automatically think of the DNA housed in the nucleus of our cells. This is the DNA inherited from our parents, half from mom and the other half from dad. The DNA in the nucleus codes for most of the proteins that bring about our traits, health, and development. As you noticed, most was italicized because DNA is actually found in two places within a cell: the nucleus and the mitochondrion. 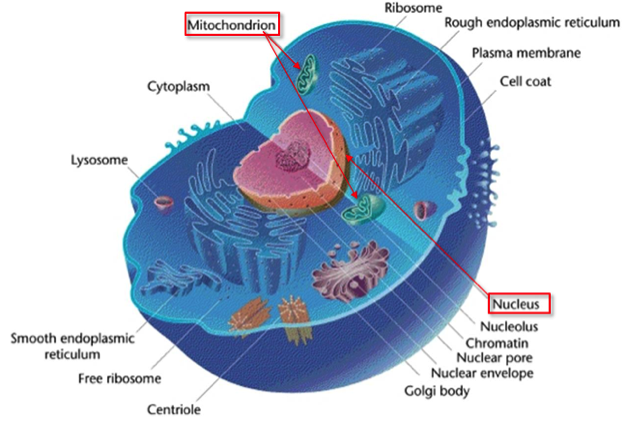 Mitochondrion, or more commonly in plural form as mitochondria, contains DNA. The DNA within the mitochondrion differs from DNA in the nucleus by shape, size, location, and origin (see table below). The origin of all mitochondria DNA (mtDNA) comes from mothers, which is how scientist trace maternal ancestry back thousands of years. mtDNA is passed to all offspring of a mother, therefore males and females can have their maternal ancestry traced.

Why does only the mother’s mtDNA get passed on?

Both reproductive cells, sperm and egg, contain mitochondria. Mitochondria is needed in reproductive cells, as well as the cells in our body, to break down food into energy. This is where 90% of the cell’s energy comes from. As the egg is leisurely waiting for a sperm, the sperm is high-tailing itself to the egg, in order to beat out the other sperms. Boom! When the two collide, the sperm’s mitochondria self-destruct and a vesicle (aka garbage man) comes to remove it. This prevents additional DNA from entering the embryo for development.

If mtDNA is maternally passed on, do siblings have the same mtDNA? 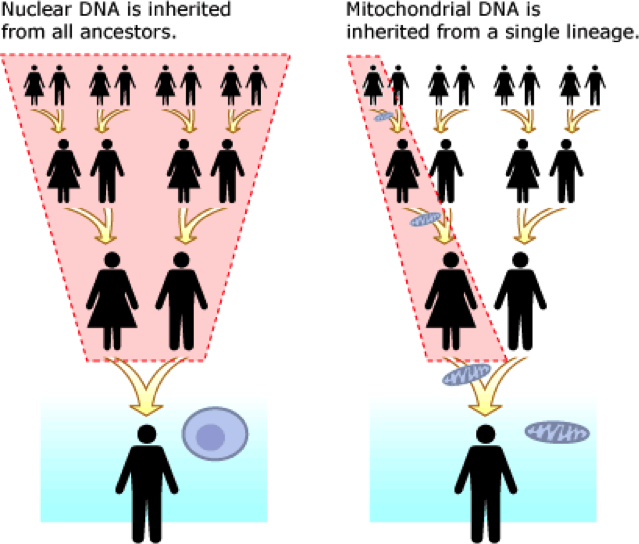 How is Maternal Ancestry traced through mtDNA?

All DNA, whether it be in the nucleus or mitochondria, goes through mutations. When a mutation occurs in the DNA or mtDNA of a reproductive cell, the mutation will be passed on to the offspring and all the cells in the offspring will have that mutation.

Mutations in mtDNA are happening today, but they will not become haplogroups for another hundred to thousands of years down the road, when enough people have today’s new mutation.