The Chemistry of DNA

DNA is an abbreviation for “Deoxyribonucleic Acid.” The name alone means a lot to people with biochemistry Ph.D’s, but what does it really mean?

The answer starts with the “NA” part of DNA: Nucleic acids. Nucleic acids are composed of three primary parts:

The phosphate group is what binds all of DNA together. You will often hear it described as the “phosphate backbone” of DNA, because phosphates give the DNA structure. Phosphates bind to other phosphates, allowing for very long strands of DNA.

The 5-carbon sugar is what separates DNA from RNA. DNA has one less oxygen atom in its sugar than RNA. Thus, it is “deoxyribose” instead of “ribose.” This distinction matters to biochemists and geneticists, but not to most people. This little change makes DNA a far more stable and durable molecule than RNA.

These 4 nitrogenous bases, or letters, make up your entire genome. Your body uses them to code for everything from your hair to your personality. 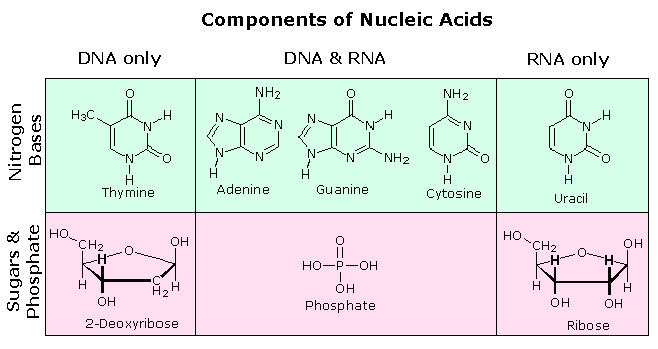 The components that make up DNA.

It’s easy to see 2D images of molecules and think of them as flat. But that couldn’t be further from the truth. In reality, all molecules possess a three dimensional structure that influences how they behave. DNA is no exception to this, and its 3D structure is incredibly important.

But before we get to the classic “double helix” that many of you are familiar with, we need to talk about hydrogen bonding. The nitrogenous bases (ACGT) that we mentioned earlier can bond to one another. They bond in a specific way:

Hydrogen bonds can be easily made and easily broken. This gives DNA the ability to “unzip” so that it can be read, and the ability to “zip” back up for storage when it isn’t needed.

Because of this hydrogen bonding, DNA rarely exists as a single strand. It will often bind to a “complementary” strand that contains the exact opposite set of base pairs. For geneticists, it is important to know which strand we are reading, because researchers only focus on one strand at a time.

A single strand by itself will form a helix. But since DNA generally comes in pairs of strands, it forms what is called a “double helix.” This shape, discovered by Rosalind Franklin, James Watson, and Francis Crick, creates a “twisted ladder”. You have probably seen depictions of this twisted ladder. The double helix structure is very stable, and can bend and twist to fit as needed. It can also wrap around certain structures. 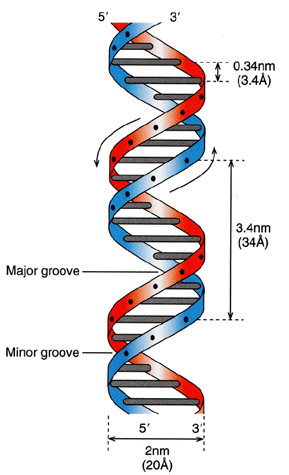 At this point, you may be wondering what “RNA” is. Glad you asked!

See, DNA is part of really large molecules. These molecules can’t move very quickly. DNA also contains a LOT of information. If you want to create a single protein, you don’t need someone’s entire genome. You just need a small piece of their DNA.

This is where RNA comes in. Your cells can “unzip” the DNA, opening up a spot where the DNA can be copied. It then brings in RNA to make a small copy of the DNA. This process is called “transcription.” Once the cell makes the RNA, the DNA zips back up.

If you think of it in computer terms, DNA is a lot like your hard drive. It stores a bunch of information. You only need some of it at any given moment. So your computer copies the information it needs to your RAM. Your computer’s RAM has a lot in common with RNA.

Your RNA now has the code for a single protein. Fantastic! Now that information needs to get translated into an actual protein.

Your RNA will look for the nearest ribosome in your cell. Ribosomes are like the construction workers in your cell. They build proteins. Ribosomes read 3 base-pairs of RNA at a time. These 3 base pairs are known as a “codon.” Each codon codes for a specific amino acid in the protein.


What do proteins do?

The better question is… what DON’T proteins do? In the cell, they basically perform almost every function that cells need to live. Proteins transport chemicals around cells, build and maintain cellular structures, and provide conduits for nutrients.

So now you know the basic chemistry of DNA. There are many nuances to all of this, but they are for another day. For now, just be aware that DNA is a very complex molecule that contains the basic instructions for building every living thing on Earth.