With the concept of ancestry and DNA testing becoming consistently more popular, it’s important to know what the term ethnicity really means. Ethnicity can help you understand where you come from; finding your origins might mean finding a family that you never knew you had!

According to the United States Census Bureau, ethnicity determines whether a person is of a certain region’s origin or not. For example, a person may have DNA that indicates he or she is from Latin America and therefore can rightfully claim that they are of Hispanic ethnicity.

An article in Stanford’s University’s Gendered Innovations journal defines ethnicity as groups, such as Irish or Sioux, that share a common ancestry, language, culture, religion, and customs. In order to be a member of an ethnic group, a person has to conform to some or all of the customary practices of that specific region or culture.

What Are the Main Ethnic Groups?

There are many ethnic categories that call the United States home. Some people identify as American, while others maintain their ethnicity as another group, largely related to the culture, customs, or beliefs they relate to or practice more closely. Though there are many ethnic groups to consider (over 500 regions across the globe), World Atlas states that the main ethnic groups that the majority of people in the United States identify with include:

Even though ethnicity is a category of people that self-identify with a group of people that are a part of the same culture, language, or heritage, it is interesting to know your ethnic estimation and whether that aligns.

With the help of a DNA ancestry test from CRI Genetics, you can finally become clear on your geographical and cultural origins and learn more about your ancestry! If you’ve ever wondered about your origin, or you have always assumed your ethnicity but have never known for sure, a CRI Genetics DNA test could help you discover facts about your ancestry that you never would have guessed.

Should I Use Race or Ethnicity? 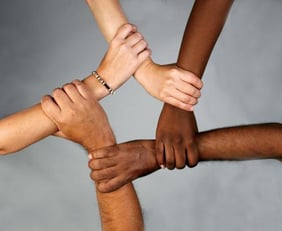 There is an acknowledged difference between race and ethnicity, a difference that is outlined, again, by the United States Census Bureau. According to the bureau, race is a person’s self-identification to one or more social groups. There are general social groups that a person can identify as, such as White, Black or African American, Asian, American Indian and Alaska Native, and Native Hawaiian and Other Pacific Islander. In addition, an individual can identify as more than one race, usually one more specific than the other.

In short, racial groups relate to the biological makeup of a person and ethnicity relates to the culture that a person has been immersed in or identifies with.

Even though all humans are a part of the same species—Homo sapiens—there are many genetic variations that manifest in differences in physical appearance, such as variations in skin color, that can lead to minority groups within a population. Interestingly, the difference in DNA of two humans varies less than 0.1%, meaning that the differences between races are not as significant as one might expect.

Can DNA Tell Your Ethnicity?

DNA testing can provide an estimate of your ethnic background, but it’s important to know the way that DNA works.

You receive 50% of your genetics from each of your parents, who also received 50% of their genes from their parents, and so forth. DNA is passed down from your ancestors randomly, with certain genetic parameters that limit the amount of DNA you can inherit from one single ancestor. It's clear that your DNA will not be able to paint the perfect picture of your ethnic background, leaving some room for informed estimations.

Finding out more about your ethnicity can help you uncover modern-day locations of those within your ethnicity as well as migrations to and from the region, the history of your ethnicity, and ancestors of note.

Can You Tell Skin Color from DNA?

In short, yes. Skin color is the indication of a direct correlation between the geographic distribution of both ultraviolet radiation (UVR) and the distribution of indigenous skin pigmentation across the globe, according to research from the Smithsonian National Museum of Natural History. As a result of repeated, generational exposure to the sun, DNA can be mutated in skin cells, causing a change in the hue of someone’s skin (and, ultimately, the skin of a particular group of people).

To get a little more in-depth with the science behind it all, people have varying skin colors because of the amount and different kinds of melanin produced in their body. Melanin is a genetic mechanism within the body and is therefore detectable by DNA testing.

Interestingly, according to the same article, the evolution of human skin color suggests a few reasonings. First, from about 1.2 million years ago to less than 100,000 years ago, archaic humans had dark skin. Then, as humans started to migrate around the globe, skin color started to vary due to changes in exposure to UVR and pressure. Natural selection then favored lighter skinned individuals because of the increased absorption of the vitamin from the sun, therefore naturally decreasing the amount of darker skinned individuals in the migrated groups.

Discover More About Yourself

CRI Genetics has created a DNA testing program that allows you to uncover complex information about your DNA. After sending in your completed test, your DNA sample will be analyzed and summarized in an advanced genetic report that is interesting and easy to understand. Some individuals that have completed their CRI Genetics DNA test have even been able to learn more about their possible health predispositions and consulted doctors to work proactively with their results.

Improve your life through genetic testing by ordering your own DNA test online! If you still have questions, we’d love to give you the answers you’re looking for. For more information, call us at 1-800-571-9216 or online.