Children and half siblings becoming more common, family trees can sometimes be quite complicated to understand. If your father has a half-brother (your uncle) who is younger than you, are his kids still your first cousins? Who are you for your sister’s step-children? What does first cousin once removed mean?

While all these questions deserve a longer treatment, we’ve decided to focus this post on double first cousins and their genetic relationship.

Let’s start with the basics first.

You certainly already know that you (Child 1, a girl for the sake of our example) inherited 50% of your mother’s DNA, and 50% of your father’s, so did all your siblings.

You may also know that these 50% are shared randomly: your mother didn’t give the same 50% of her DNA to you than she did to your sister (Child 2).

In other words, your sister also got half her DNA from your mother’s and half from your father’s but your DNAs are different and overlapping (some of it is identical, some of it is completely different).

In this example, we only look at one chromosome, but the same is true for your all genome. Statistically, siblings end up sharing about 50% of their DNA.

Now, let’s say your sister and you both have kids. Your kids are first cousins (there’s only one generation between them and their common ancestors: your parents). They share their mother’s family (their grand-parents), but not their father’s. Thus, they share around 12.5% of their DNA (coming from their maternal grand-parents).

Now, What Are Double Cousins?

If we stick with the above story but say that the fathers are also brothers (like you and your sister), your children become Double Cousins. They share both sides of their families (maternal and paternal), and two sets of grand-parents (instead of one only). Thus, they share 25% of their DNA (twice more ancestors in common). They are considered double-related.

As an example, let’s take a look at normal first cousins vs. double first cousins. In the below images, the fathers are grey (not related) or yellows (brothers). You and your sister are the same as the previous image.

As you can see, double cousins are more genetically related than first cousins because they share not only their maternal DNA, but also their paternal DNA (grey vs. yellow). It becomes even clearer when we compare the DNA they got from their fathers, than the one they got from their mothers with the method used earlier (images below).

In other words, double first cousins share the same amount of DNA that you would share with a grandparent, a half-sibling or an aunt or uncle. And they transfer this genetic closeness to their offspring: children of double first cousins are double second cousins, and so on.

What Happens When Both Parents Are Twins?

It depends on what kind of twins they are.

If both sets of twins are fraternal twins (they came from two different eggs), then they are brother who were born on the same day. They share about 50% of their DNA, the double cousins will share about 25% of their DNA, like in the example above.

However, identical twins’ DNAs barely vary, they are almost perfect clones of each other (only minuscule details like a beauty mark can separate them). They inherited the same DNA from their parents. Thus, if twin sisters reproduce with twin brothers, the resulting children are genetically indistinguishable from full siblings. 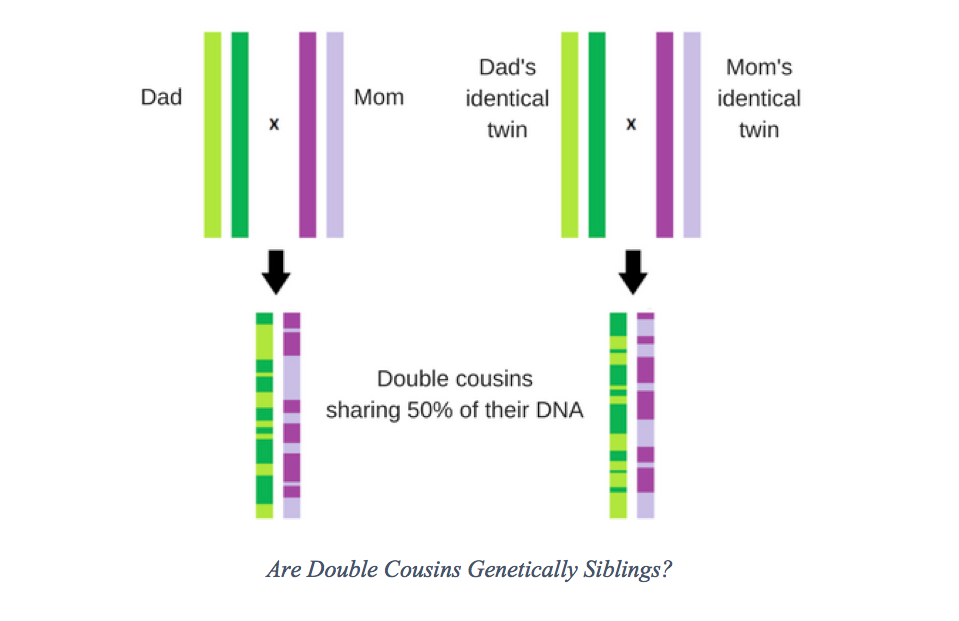 The offspring of two sets of identical twins share the same amount of DNA as siblings (50%).

Finally, when identical twins reproduce with siblings their offspring are more related than half-siblings but less related than full siblings. They share between 25% and 50% of their DNA.

How Can You Find Out How Much DNA You Share With Your Cousins?

As we’ve understood thanks to the examples above, double cousin may be genetically siblings if both their parents are identical twins.

However, there is no way to know exactly how much DNA you share with your double cousin except if you take a DNA test like CRI Genetics.

Because our DNA test studies 527,414 genetic markers on each DNA sample (yours and anybody else you want to test against), you’ll have a pretty good idea of how similar (and how different) your and your double cousins are.

You can even discover your exact degree of relationship and your genetic filiation through CRI Paternity. While CRI Genetics digs into your past to tell you about your lineage, your ancestry and your DNA specifics, our branch CRI Paternity focuses on your filiation with other members of your family to help you build and interpret your tree.

Both CRI Genetics and CRI Paternity use the same DNA analysis tools designed and created by Alexei Fedorov (internationally acclaimed geneticist) and his team. They can also complement each other, allowing you to expand your knowledge about your origins even further. So you can get the most accurate answers now.