Are you ready for this healthy dose of common sense... Or, er, scientific concepts that many people overlook?

Prepare to have your mind blown.


Today, I’m going to tackle some of the most common misconceptions involved with DNA testing for ancestry.

…But I hope you’ll just give me more high fives!

Once again, I’ll try to keep things as simple as possible while I drop bombs on the biggest ancestry DNA testing myths.

Have a seat and enjoy the ride, because here we go:

Okay, this may be hard to take initially, but it needs to be said:

You may have a grandfather who lived in Italy, but he was not 100% Italian. Like you, he had ancestors before him. Some of them migrated to Italy from somewhere else.

Humans have moved around a whole throughout the course of history. Going back at least 50,000 years, every human who has ever lived has ancestors from somewhere else.

You could be Jewish as far back as your family knows, but you’re still bound to have some non-Jewish DNA from some ancestors.

That brings me to the next misconception…

Ancestry DNA Testing Myth #2: “I know my ancestry because I know my last name.”

Again, this may come as a shock, but it needs to be said:

Genetics is NOT the same thing as genealogy.

Genealogy is the study and tracing of lines of descent.

Genetics is the study of inherited DNA.

One can be used to help efforts in the other, but they are not the same. Genetics can help fill in missing links in genealogy. Genealogy can help trace the source of certain inherited DNA.

This last bomb should hit a little softer than the rest:

DNA inheritance is random and is almost NEVER equal or even.

Thanks to Myth #1 (no one is 100% anything), we know it’s very unlikely anyone is exactly “half this, half that.” There’s a larger point to be made here, so we’ll entertain the idea for the sake of simplicity in an example.

Common logic would lead most people to assume you have an ancestry breakdown like this:

I mean, it just makes sense! Doesn’t it?

Unfortunately, DNA inheritance isn’t that simple. In an earlier CRI Genetics DNA Test Education blog, we discussed how each of your parents have 46 chromosomes.

Before I continue, I have to admit we’re losing a degree of scientific accuracy with this example. One entire chromosome typically doesn’t “belong” to any one nation or region. There are patterns among smaller pieces of DNA within chromosomes that can be matched to groups of people from certain nations or regions. However, the math and logic are easier to follow if we simplify things this way.

Now, back to the example…

Which half you inherit is totally random.

That would make you: 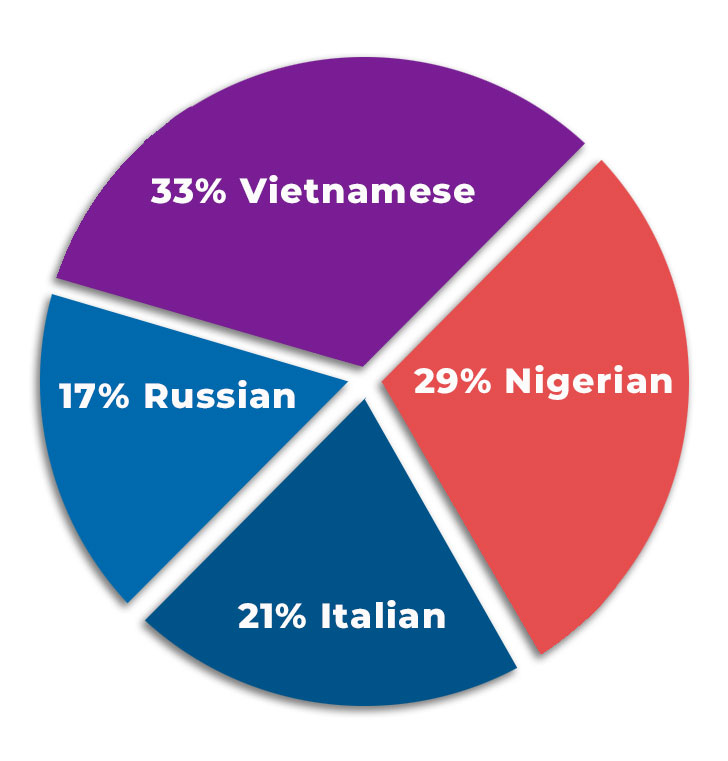 This random, uneven inheritance of DNA is also why siblings almost always get different ancestry results from their DNA tests.

If we use the parents from the above example, a sibling could end up being:

Now, if you imagine this random, uneven inheritance of DNA generation after generation…

It can get truly mind-blowing—and a little sad, in some cases.

Imagine the sibling has a child with someone who is half-Italian, half-British…

This child—the grandchild of the original Nigerian-Italian example—could see a breakdown like this:

Here, we see a child who ended up MORE Italian than one of its parents!

Unfortunately, it’s also possible for certain ancestries to fade away in a family’s genetic makeup over time.

This is just one example of the things that can happen with the random inheritance of DNA (or lack thereof). In just three generations of looking at how the cookies crumbled, we can see how easy it is for BIG surprises to happen in a family’s ancestry DNA testing results.