Do You Get Your Hair Genes From Mom Or Dad?

Your genetics are your body's blueprint. They determine how you look and how your body works from the start (then your lifestyle may take over). If you remember your biology lessons in high school, you may already know that you inherited 23 gene-carrying chromosomes from your mother and another 23 from your father. These chromosomes make up your genotype. How they get expressed, what you see in the mirror, is your phenotype.

While it might seem easy to determine some of what you inherited from each of your parents (blue eyes, curly hair, slender body, …), it is often much more complicated than it appears. Not only the genes you inherited don’t always have the same effect on your phenotype (blue eyes vs. brown eyes), who you inherited them from can change the end result (full hair vs. baldness). This is called “imprinting” and it can make a difference in how specific genes affect you.

So how can you know which one of your parents gave you which gene? And is it relevant?
Well, we’ll talk about that in a minute, but first, let’s take a look at the different “hair genes” and what they really mean to you.

Geneticists estimate that your 46 chromosomes are made of 60,000 to 100,000 genes. With all the possible gene combinations, you are one of 64 trillion different children your parents could have given birth to. That’s the reason why your hairline, height or eye color can be drastically different from your siblings. You were “drafted” the way you are. You are unique.

Now, let’s dig deeper and take a look at your traits.

Each one of your genes is made up of DNA and has instructions for a specific trait. While some genes carry enough directions to completely control a trait (that’s how Gregor Mendel discovered inheritance), most of them interact (work together) to determine your phenotype characteristics. Your parents contributed to each one of your traits, but they could have passed along different versions of the same gene (alleles). If they give you the same alleles, the trait is homozygous, but if the alleles are different, the trait is called heterozygous. Usually a homozygous trait will show up in your phenotype. Heterozygous traits can be much more complicated. Sometimes one allele is dominant, and it is expressed over the recessive gene. Sometimes, genes and their alleles are additive (the sum of the alleles is responsible for your phenotype, like in your hair color).

However, dominance does not mean that one allele completely shuts down the other; both are active. That’s how your mother could have passed on the blue eyes gene while she has brown eyes (brown is dominant, she carries blue without expressing it).

Genetics Of Your Hair Texture

Hair texture is determined by multiple genes and alleles that differ among world populations. For example, straight hair in Asian countries is caused by two genes and their respective alleles, but these genes are different from the ones for straight-haired Europeans. Likewise, the alleles for curly hair are not the same in Africa and Europe. It is likely that many additional genes contribute to hair texture and thickness in various populations.

Your parents provided one allele per gene at time of your conception (then these alleles paired to form your hair texture genes). It is the interaction among these alleles, not one specific gene, that determined the character of your hair.

Hair type is an interesting case of something called incomplete dominance (one allele is not fully dominant over the other one). It is also a continuous trait, meaning that hair can be straight or curly or anywhere in between. This means is that if you have one allele of each version of the gene, you get some degree of wavy hair (a mix of the two genes).

Let’s look at a curly headed and a straight-haired Caucasian couple. What hair texture could their offspring get? From what we’ve seen above, it should be somewhat wavy, but it’s not that simple.

You already know that there are two versions of the Caucasian hair type gene, curly (C) and straight (s). If you have two curly alleles (CC), you’ll have curly hair. If you have one curly allele and one straight allele (Cs), your hair will be wavy. Finally, two straight alleles (ss) will give you straight hair. A wavy-haired person can contribute either a C or an s gene. If paired to a straight-haired person (ss), then the kids would either have straight (ss) or wavy hair (Cs).

Genetics Of Your Hair Color

Like for your hair texture, many genes work together to determine your hair color. They control the amount of pigment (melanin), its type (eumelanin for blond to black, or phenomelanin for red), its production, and its distribution (how close together the melanin granules are = how deep the color is). The more eumelanin a person has, and the denser it is, the darker the hair will be.

Now, how is this passed on?

Eumelanin genes are not recessive or dominant, but either “off” or “on” (additive: they all work together). The more "on" genes you received, the darker your hair color.

As an example, let’s say "E" is an “on” gene, and “e” is an “off” gene, and that they are four genes coding for your hair color (a total of eight alleles). In our example, both your parents have EEEEeeee (light brown/dark blond). They each gave you four eumelanin alleles (your mother gave you EEee, your father gave you EEEE), so you end up with EEEEEEee. As a result, your hair is a dark shade of brown, much darker than any of your parents’. On the opposite, your sibling could have received Eeee from your mother and EEee from your father, ending up with EEEeeee and a lighter shade than both your parents, and much lighter than yours.

Naturally blond hair (eeeeeeee in the above example) is rare and found almost exclusively in Europe and Oceania, through a recessive mode of inheritance (both parents pass on the blond hair gene). 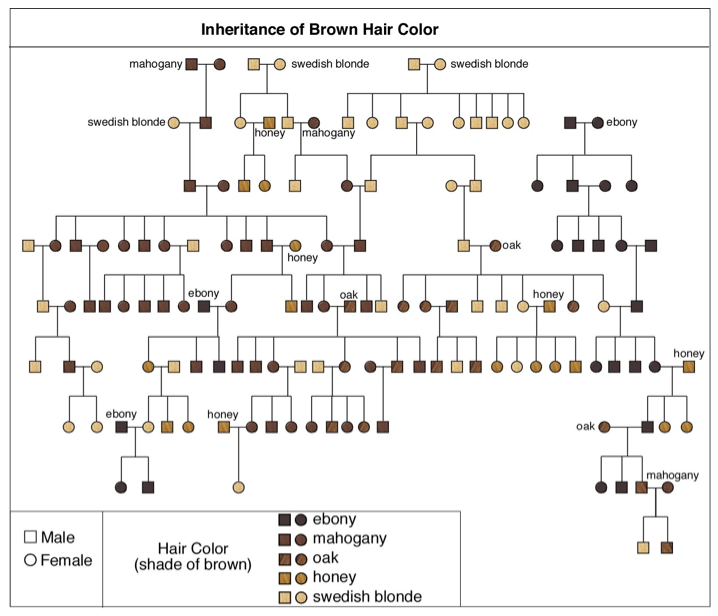 Pheomelanin (red pigment) is a different gene only carried by people from European Ancestry. It is now believed to be dominant over blond and you will likely pass it down to your offspring (that’s how two brunettes can give birth to a red-haired). In other words, you can be a redhead without knowing it. The eumelanin in your hair is expressed more than the phenomelanin, and your hair may have a reddish hue that's masked by a stronger brown or black pigment.

Your genes also determine how your hair color will change over time, how early you’ll start to see gray strands, and when it’ll turn white. Researchers made the connection between the gray hair trait and a specific variation in the blond gene seen exclusively among Europeans—known to have a higher chance of premature graying than people of other descent. This variation may have actually been selected tens of thousands of years ago in human evolution. Although there was probably pressure for our ancestors to possess hair of a certain density and shape (curly or straight) in different climates, there might have been sexual selection for genes linked to blond: standing out from the crowd.

Like nearly two out of every three men will begin balding by the time they're 60. Like them, you’ve noticed your receding hairlines getting deeper, your forehead is getting higher, the hair at the back of your head is thinner and thinner. You are on the unfortunate way to baldness.

While not all hair loss is genetic, one specific type is passed down from parents to their offspring: androgenetic alopecia, more commonly known as male/female pattern baldness.

Female pattern baldness affects women differently and rarely results in total baldness. It’s typically a general thinning of the hair on the top and sides of the scalp. The receding hairline common in men doesn’t usually show up in women with androgenetic alopecia.

Male pattern baldness can start as early as the late teens and early 20s, and usually works backward from the temples to eventually cause partial or total baldness on the top and sides of your scalp. Typically, even if the entire process from having hair to getting totally bald takes 15 to 25 years, some men go bald in five years or less.

There are a lot of myths and misinformation about the genetic causes of male pattern baldness (MPB). One of the most enduring is that you inherit it from your mother. While there is some truth to this, it is not the whole story.

If you're a man, you got your X chromosome— which either has or does not have the variation of this gene that promotes baldness—from your mother. There's a 50% chance that she got it from her father—so if your maternal grandfather is bald, there are chances you will be too. (The same goes for your maternal grandmother, but it's harder to casually assess it, as female pattern baldness is not as obvious.) In other words, if your dad has a full head of hair but your mom’s brother is a 5 on the Norwood Scale at age 35, chances are you will follow your uncle’s journey through MPB. 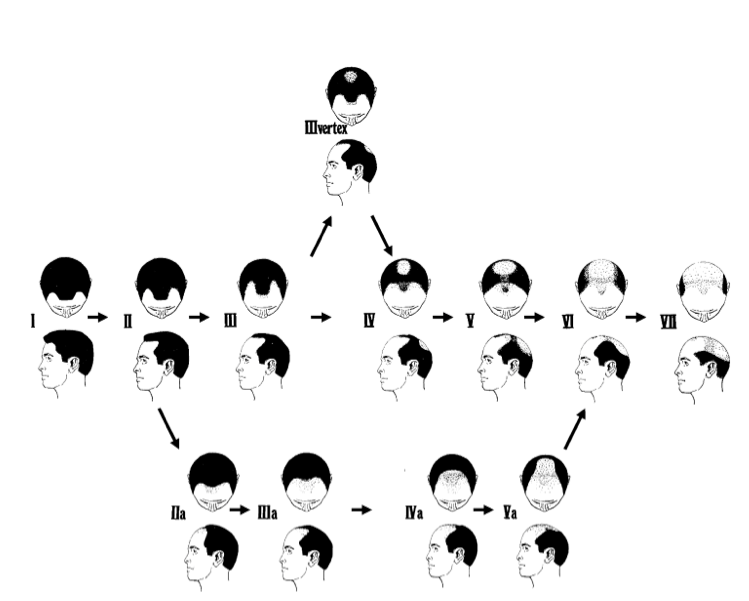 However, the gene for MPB is actually passed down from both sides of the family. It may also skip generations and affect siblings (male or female) completely randomly. That means that your older brother may have the George Clooney hair while you are stuck with the Vin Diesel look, or visa versa. BUT, if most of the men on your mother’s AND your father’s side are bald, then you, your sons and brothers most certainly inherited the gene.

Anyhow, remember that everyone naturally loses hair every day. Thus, your comb looking a little bit clotted at times does not necessarily mean you’re going bald. Furthermore, if your hair is falling out by hand full, you may be having some extreme stress response or some form of dread illness. Instead of consulting a barber, get yourself to your doctor’s office for a full check-up.

So Who Gave You Your Hair Characteristics (Color, Texture, …)?

As you may have realized by now, the question is complex to answer. Many genes are involved in your hair characteristics, and these characteristics can evolve over time. However, you could find your answer through a DNA test. You won’t need a prescription to get it, simply a home-test ordered on line. Make sure to find a good company though, so your results are as accurate as can be.

While home-DNA tests still have some limitations, we, at CRI Genetics, thrive in helping you fully understand your origins and your genome. So that you can be prepared for anything that may come your way. We are proud of testing your DNA against 527,414 genetic markers multiple times so we can give you the best possible results. And we won’t stop with your hair texture, color or loss risks. We’ll also inform you about your ancestors, your lineage, your caffeine sensitivity and many other traits.