Do You Keep Shamelessly Blaming Your Poor Grandpa for Losing Your Hair ?

Can you really blame your maternal grandfather for your alopecia?

What do Jude Law, Matthew McConaughey, Tom Hanks, Elton John, and Gordon Ramsey all have in common — aside from being some of the world’s most famous male celebrities, that is?

They all have less hair today than they did ten years ago.

Read that again. Each of these high-profile celebrities has less hair than they did a decade ago, and this is because they all have a very common issue seen in many average adult males: alopecia.

Alopecia, also known as alopecia areata, is a common autoimmune condition that results in hair loss. Nearly two out of every three men will have some degree of hair loss by the time they’re 35.

You may be on your way to joining Law, Hanks, and Ramsay in the alopecia club if you experience one or more of the following:

The alopecia club is far from being exclusive, so don’t worry, you’re not alone. A balding head is a normal part of the aging process. How do you know if you’re on the path to losing your hair? Read on to see if you may be experiencing alopecia’s main symptoms.

A Closer Look at Alopecia

Like most mammals, humans are covered in hair. Besides your eyelids, belly button, palms, and the soles of your feet, hair grows on almost every part of your body. Most of that hair is found on your head. The average human head contains around 100,000 to 150,000 strands of hair.

If you’ve ever shared a shower space with someone who “sheds” frequently, you can attest that hair loss occurs on a daily basis. Humans lose up to 100 hairs a day, and while that may seem like a lot, it’s completely normal. However, hair loss can become a problem if your hair isn’t growing back fast enough to replace fallen strands, or if you’re losing greater amounts of hair than usual.

Hair loss, or alopecia, generally refers to losing a larger amount of hair than normal. It can affect just your scalp or your entire body and can lead to a balding head down the line. Although society rarely acknowledges it, both men and women can experience alopecia. That’s right—hair loss in women is also a common occurrence.

Let’s dive into some of the main symptoms of alopecia:

Now you know the major symptoms of alopecia to look out for, but what is the underlying cause for the condition? You’ve probably heard that you should blame your maternal grandpa for his genetic contribution to your balding head, but is that entirely true? And is it all genetic or are there more factors at play?

To start with the most basic question: “Is alopecia all genetic or are there more factors at play?” Your genetics are not entirely to blame. In fact, there are multiple factors that can result in hair loss. These include:

Let’s dive into each of these factors and how each can contribute to losing your hair.

Aging: As you grow older, your hair follicles naturally slow down their production of hair, and this may cause you to lose more hair than you grow, resulting in thinning. It’s normal for your hair to thin as you age, although around 40% of men and women will experience more noticeable hair loss.

Changes in your hormones: Hormone imbalances are usually the main cause of hair loss in women. Hormonal imbalances can be caused by numerous factors, such as birth control pills, pregnancy, a hormonal condition called polycystic ovary syndrome (PCOS), and menopause.

Stress: Another major cause of hair loss is emotional stress, and this can happen to both men and women. High stress levels can cause your hair follicles to go into a temporary “resting phase,” resulting in hair thinning.

Excessive hairstyling: Too much hairstyling or constantly keeping your hair tightly pulled back can lead to hair loss known as traction alopecia. People who need to constantly wear their hair in tight ponytails or buns, such as gymnasts, ice skaters, and ballet dancers are the most at risk for traction alopecia, and this is another major cause of hair loss in women. Additional styling methods, involving high temperatures and hair products that contain harmful chemicals, such as parabens and sulfates, may also have a negative impact on hair retention.

Androgenetic alopecia, or male-pattern baldness, is the most common cause of hair loss. The term “androgenetic” means genetic and androgen-related. If you’re still scratching your head, androgens are what scientists refer to as any of the male hormones, such as testosterone and androsterone.

The term androgenetic alopecia was originally created to refer to hair loss in men, however, it has since been expanded to include women as well.

Male-pattern baldness can start as early as your late teens and early 20s, and usually works backward from your temples to eventually cause partial or total baldness on the top and sides of your scalp.

Instead, it typically involves a general thinning of the hair on the top and side of the scalp. The receding hairline seen in men with male-pattern baldness doesn’t usually show up in women with androgenetic alopecia.

To put how common androgenetic alopecia is into perspective, studies show that around 80% of men will experience some form of male-pattern baldness by the time they reach 80 years old.

Additionally, roughly 50% of all women will experience female-pattern baldness by the time they reach 80 years old.

That’s the million-dollar question when it comes to a balding head. There’s a lot of misinformation out there about the connections between your genetics and hair loss.

For example, one of the most enduring myths is that you should blame your mother’s father for the loss of your silky strands. While there is some truth to this, the notion that a single gene from your maternal grandpa gave you alopecia is far from the whole story.

Your genetics are your body’s blueprint. They determine how you look and how your body works from the start (then your lifestyle may take over).

If you can recall your biology lessons from high school, you may already know that you inherited 23 gene-carrying chromosomes from your mother, and another 23 from your father. These 46 chromosomes make up your genotype. How they get expressed, or what you see in the mirror, is your phenotype.

Therefore, having relatives with hair loss conditions may increase your chances of developing those conditions yourself.

So… Does Hair Loss Come From Mom or Dad?

Let’s get one thing straight.

The idea that men inherit the gene for hair loss solely form their mother’s father is a myth.

However, that doesn’t make it entirely false. First, hair loss is strongly associated with the AR gene, also known as the primary baldness gene.

So far, scientists have found at least 63 genes that could play a role in hair loss.

Studies show that the genetic components of alopecia are very complex. Hair loss is polygenic, meaning the condition is determined by multiple genes, not just the AR gene. What’s more, these 63 genes can be inherited from both sides of your family, not just your mother’s side.

So just as men with bald maternal grandfathers are more likely to also go bald, men who have bald fathers are also more likely to go bald themselves. To put it a different way, if Darth Vader was bald and Luke Skywalker’s hair was thinning, we wouldn’t really need the classic “I am your father” line in Star Wars.

Hair loss genetics isn’t as straightforward as some people think. Some of the main genes for male-pattern baldness are passed down from both sides of the family. They may also skip generations and affect siblings (male or female) randomly.

That means that your older brother may have the George Clooney waves while you inherit the Vin Diesel look, or vice versa. However, if most of the men on your mother’s and your father’s side are bald, then you, your sons, and brothers all have a higher likelihood of inheriting the gene.

So cut your mother’s father some slack, okay? He can go back to being your favorite grandpa again.

The short answer to this question is, ‘YES’! Like hair loss, numerous genes are involved in hair growth as well as other hair characteristics, such as color, texture, and thickness.

There are many ways to determine your hair characteristics, however, one of the safest and most effective ways is to take an at-home genetics test.

They’re quick, painless, and could potentially allow you to get to the bottom of your balding head, as well as your other hair characteristics.

How Can I Prevent Hair Loss?

It’s important to remember that everyone loses hair every day. Thus, your comb looking a little bit clotted at times does not necessarily mean you’re going bald. However, if you believe you may be experiencing hair loss, then acting sooner rather than later may be your best bet to maintain your hair.

Although many types of hair loss are irreversible, there are effective ways to slow down the loss of hair as well as boost your hair growth. These include adding lots of protein and vitamins to your diet, taking good care of your hair and scalp, and maintaining an overall healthy lifestyle.

For a more detailed list of powerful hair loss-fighting tips and treatments that really work, check out the 7 Astoundingly Achievable Ways to Target Hair Loss And Win Back Your Confidence.

Your genetics don’t just influence your hair. They also play a role in your health, physical characteristics, and even special abilities, such as perfect pitch, caffeine metabolism, and super taste.

To learn more about how genetics influence you and the world around you, be sure to sign up for our newsletter!

Hey, Before You Go…

What does goose poop have to do with losing your hair? 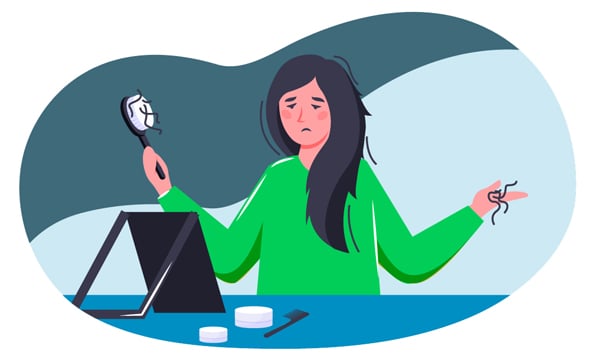 Stay in the Know!

We're dishing out the latest compelling insights and discoveries about your genetics.

Be the first to explore our latest and greatest blog posts
(your future self will thank you).