The Language of DNA

The secret building blocks inside all of us, and how we can understand them better

Before we continue with our DNA and language analogy, we should be very clear on how we’re using this metaphor. Cells can communicate in all sorts of ways. They can communicate to other cells with chemicals. They can also communicate through electrical signals. Today, we’re talking about the communication that cells pass onto their offspring.

Together, these four letters make up your genetic code. They code for every muscle, nerve, and skin cell in your body. The human genome contains about 3 billion of these letters, spread across 23 pairs of chromosomes.

The Words and Sentences

But letters alone do not make a language. I could show you a Cyrillic alphabet, and it wouldn’t mean something to you unless you can speak a Slavic language. In the same way, we need to know what the words are in DNA.

Conveniently, all of DNA’s words are the same length. They are all three (3) letters long. Scientists call these three letters a codon. In the following chart, we’ll see what these codons mean. 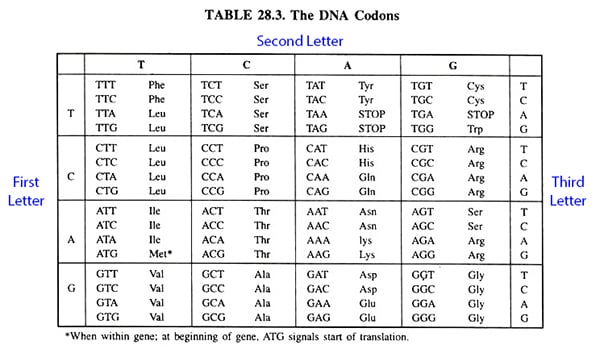 Each codon designates an amino acid. For example, the codon TAT codes for the amino acid Tyrosine. If we continue our analogy, this makes each codon a “word.” These words are the basis of DNA translation. In DNA translation, DNA is converted into a specific sequence of amino acids.

But words alone aren’t enough to convey meaning. You need to string words together to form sentences. In the same way, amino acids combine together through DNA translation to form proteins.

These sentences need punctuation. Punctuation serves to let you know when a sentence begins, when it ends, and any pauses or gaps in-between. DNA is no different. It uses specific codons to indicate the beginning or ending of a sentence.

For example, the codon “ATG” indicates the beginning of an amino acid sequence. For this reason, scientists refer to ATG as the “START” codon. It is always at the beginning of a sentence. Without a START codon, your cells wouldn’t know where to begin making proteins.

There are also three codons that act as a “STOP” codon. These three codons (TGA, TAA, TAG) always indicate the end of a sentence. Without a STOP codon, your cells wouldn’t know when to stop making a given protein.

This would produce a protein made of 3 amino acids (Tyr-Glu-Gly).

Most proteins are not this short. For example, a hemoglobin subunit is 141 amino acids long.

To continue the metaphor of language, sentences aren’t the only part of a written document. Writers clump similar sentences together into paragraphs. And the same is true for proteins. Individual units of protein may come together to form something larger than themselves.

For example, take a hemoglobin molecule: 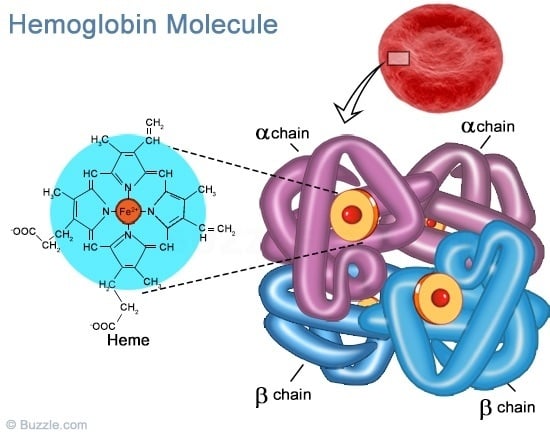 Now I hear you screaming, “Hold on! Where did that fancy looking structure come from?”

They arise because proteins are not just long chains of amino acids. They actually bend and change shape. The shape they take depends on several factors, including:

The composition, shape, and organization of proteins make up their biomolecular structure.

And last, but certainly not least, we come to the essay.

Why not chapter or book? Well, simply put, we need a good place to stop this metaphor. So let’s recap:

Scientists call the process of going from DNA to protein transcription and translation. In next week’s blog post, we’ll cover the actual mechanics of how these processes work.