There's a lot more to being German than you think

8 min 15 Jan, 2021 by Job Merkel
Caution: We believe the truth is important, but we also want to give a warning: some of the events stated in this blog refer to events in history that are reflective of the time period—for example, such as the Holocaust. If you’d rather not read this type of content, please enjoy one of our other blogs instead.

If you have German ancestry, your DNA is rich with stories of migrations, successes, and tribulations. While the World Wars and Otto von Bismarck are certainly integral to recent German history, there’s a lot more to your story than just the last century and a half.

Thanks to the hard work and persistence of scientists and DNA testing, we’re able to understand more about the genetic landscape of the Germans than ever before. Truth is, there’s a lot more to being German than you think.

Think you know what being German means?

Take a look at these top 6 German ancestry surprises to see where you fit in—you may be shocked to know your family’s history!

Evidence of the first humans in Germany dates back to 4600 BCE, during the late Neolithic Period, and after the last Ice Age. Although there are no written records from this time period, anthropologists discovered tools, structures, and garbage that helped them piece together early German life.

Fast-forward to the fall of the Western Roman Empire in 476 CE and the picture is much clearer. First came Julius Caesar’s invasion and defeat of the Gauls in 51 BC, a strategic move for gold so he could pay off debts. This defeat coincided with Germanic tribes assimilating the Gauls into Gallo-Roman culture as they expanded into new areas.

Centuries later, the Germanic tribes would be ready to capitalize on another situation. The Franks (a western Germanic tribe) made their move just as the Western Roman Empire was falling.

Within 80 years after the fall of Rome in 480 CE, the Franks conquered most of Western Europe. They continued their expansion by conquering Italy in the 700s, forming all of Francia. During this series of conquests, they destroyed the Burgundians, the Gauls, and the Ostrogoths. They even got some land in the Iberian Peninsula.

In essence, before the French were French, they were German.

In 800 CE, Charlemagne, King of the Franks was crowned Emperor of Rome by Pope Leo III. The event set the Frankish kingdom on the path to eventually becoming the Holy Roman Empire. 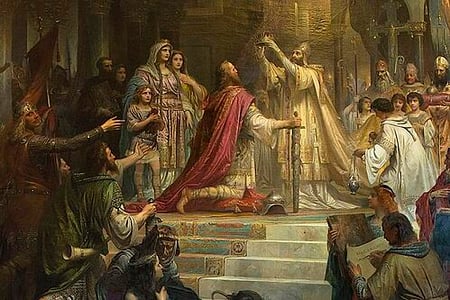 Let’s just say this didn’t sit well with any of the kings. Western Francia separated from this confederation and became France, Middle Francia was annexed by Eastern Francia, and the Holy Roman Empire was founded in 888 CE.

Because the Holy Roman Empire (HRE) was a loose collection of principalities and territories, its map was baffling. It was loosely divided into four different kingdoms:

If you would like to read more about that and how the kingdoms were divided during that time, click here.

Similarly, as with the French, those part of the HRE, including but not limited to Italy, were actually of German ancestry. Because these two ancestries overlapped during history’s winding road, it follows that you could potentially have any of these results in your DNA report.

In the early 1800s, the HRE was not ruled properly. It became weakened due to several major schisms. So, the French—partly influenced by the American Revolution—had a revolution of their own.

Chaos ensued and a new leader rose to power: Napoleon Bonaparte. By navigating the dangers of post-revolution France masterfully, he quickly became king.

This was not good news for the rest of Europe. In less than a decade, he obliterated the Holy Roman Empire and conquered most of Europe on his warpath. 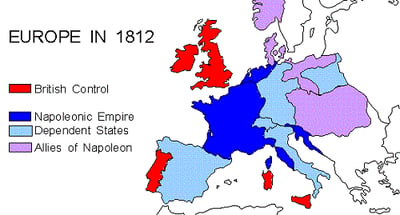 In his conquest of Europe, however, Napoleon made two fatal mistakes:

1. He tried to invade Russia during the winter.
2. He messed with too many Germans.


Famously, Napoleon was defeated in 1815 at the Battle of Waterloo, which ended France’s hold over the continent.

The French, who were German, and those part of the HRE with German roots were about to see territories and their lives shaken up even more. The tribes that began as Germanic and went by different names had expanded throughout most of the continent.

German peoples had their work cut out for them over the 100 years following Napoleon’s defeat and the fall of the HRE. Many things happened during that time, but here are the most noteworthy, as Germany slowly rose from the ashes: 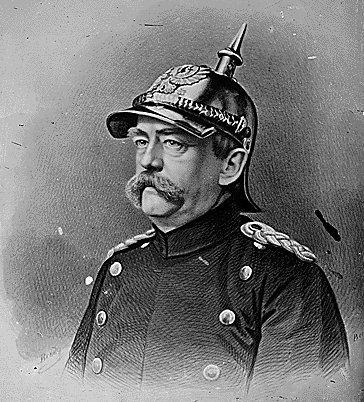 Covering both World Wars would require its own blog series. Instead, let’s discuss how those wars impacted German demographics and ultimately, how they affected genetics.

World War the 1st: Archduke Franz Ferdinand was assassinated, and all hell broke loose. The details as to why his death was so important are somewhat convoluted. All you need to know is that his death launched the events that would unfold over the next 30 years.

World War I (WWI) impacted European and German populations heavily. Civilians and soldiers died, and Germany was left in ruin. Germany lost an estimated 2 million soldiers, and around 500,000 civilians.

Between WWI and WWII, the Weimar Republic appeared, hoping to repay the war debts it incurred during the Great Depression. This only served to drive Germany’s economy deeper into the ground. By printing money, the Weimar Republic completely devalued German currency. This gave rise to the Nazis, who blamed Jews and other minorities for problems.

Nazi Germany rose to power during World War II, committing atrocities against its own people. These atrocities are referred to as the Holocaust. Some of the groups most heavily affected during this time were:

The actions of Nazi Germany altered the genetic makeup of modern Germany forever. Many of those who survived the Holocaust fled to the western hemisphere and to the UK. As such, German DNA is extremely prevalent all over the world these days.

Today, Germany is 90% European, with 75% being native German. While  those percentages make it seem like Germany is ethnically homogenous for the most part, don’t be fooled—there is great diversity within the country when it comes to ancestry.

Germany’s government actively supports immigration from other regions compared to the rest of Europe. Next to the United States, Germany has the second highest international immigration rates in the world. The German government actively works to improve the lives of minorities and make reparations for Holocaust damages. Among many other things, they aim to reduce anti-Semitism and anti-minority sentiment.

With close to 83.1 million inhabitants, Germany is now the most populous nation in the European Union. Seeking protection from armed conflicts and persecution, the number of people applying for asylum in Germany between 2015 and 2019 reached 1.8 million.

Here’s a look at where immigrants are coming from around the world: 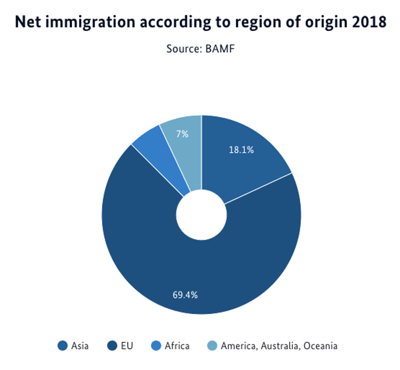 Due to such widespread modern migration, Germany has become more diverse than ever before. The consistent level of genetic mixing means that Germans are thoroughly diverse, both at home and abroad—German ancestry is far more complicated than you think!

That’s where DNA testing comes in—your very own unique DNA allows you to go back thousands of years, uncover your ancient ancestries, and discover the depths of your family roots.

Here is an infographic to help you visualize Germany’s genetic roadmap through time:

Discover Where Your Ancestors Came From

Ancestry DNA can tell you what regions your ancestors came from and which traits are specific to only you. By comparing DNA samples from all over the world, you can zero in on your family’s past, learning where they migrated from, when they moved locations, along with other migration patterns.

You are here today because your ancestors, my ancestors, all our ancestors—conquered unbeatable odds (literally, drought, famine, and the Ice Age could have wiped humans out), so they could pass their genes on to subsequent generations… to us.

For more information concerning DNA testing and how to select the best form of testing for your needs, click HERE.

There is a treasure trove of information waiting to be uncovered.

All you have to do is reach out and grab it.

Hey, before you go…

Alexei Fedorov here, and I want to share something with you about why I’ve made this my life’s work. If you’re reading this, it means you share some of that curiosity, about who you are, and where you come from.

We are living in an unprecedented time. Humans are THE most studied species on the planet, and now we have the opportunity to transform all of that knowledge into insight. I could not do what I do without you, our human race that makes us so incredibly unique and complex. I won’t stop learning about the building blocks of life. Whether or not you want to participate in your own discovery or that of the human race is up to you.

DNA testing combines some of the world’s most powerful disciplines: biology, anthropology, and history, in order to give you answers about where you come from. Here are some things you’ll get when you take a DNA test:

DNA is the Secret to Unlocking Mankind’s True Potential

I believe everyone should have access to the information embedded inside them. That’s why I want everything we do, from our research studies to the ancestry and health reports we provide, to be available to you.

Aristotle said, “Knowing yourself is the beginning of all wisdom.”

We are all in this together when it comes to the exploration of human beings and how we work.

Join the movement by clicking the button below and let’s make the journey together.